The history of the world through the eyes of an apple

In this urban quadrant that has now made itself known all over the world for its examples of Street Art, the process of urban eco-redevelopment started in 2018 with Hunting Pollution proceeds.

VentiduePortoFluviale - Mela Mundi is, in fact, the new eco-mural that appears on the walls of Via del Porto Fluviale, signed by ZED1, commissioned by the Porto Fluviale property, on the occasion of the tenth anniversary of the venue, and by the non-profit Yourban 2030. 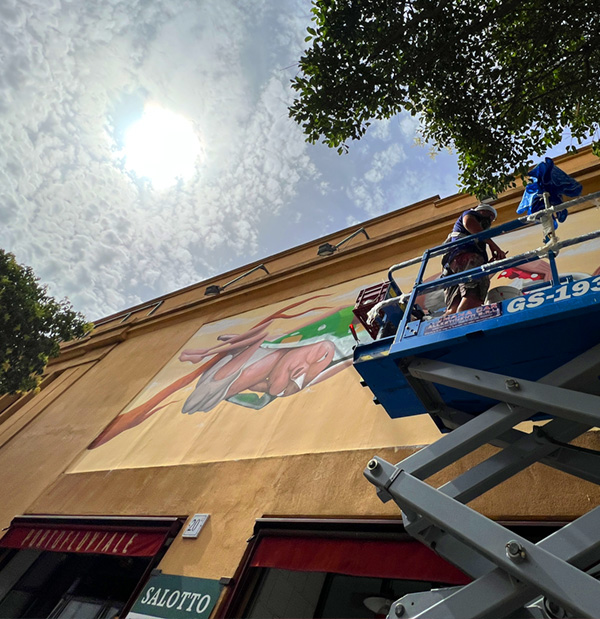 A SPECIFIC INVITATION TO RECONCILE WITH NATURE

VentiduePortoFluviale - Mela Mundi is the history of the world through the eyes of an apple as a symbol and "messenger" of nature itself: an original square narration - with a surprise ending inside Porto Fluviale - in which from Eve to contemporaneity, passing through the Roman era and the Middle Ages humanity is told through an unprecedented witness with a precise invitation to reconcile with nature, respecting the environment.

AIRLITE / THE ART THAT PURIFIES THE AIR

TRANSFORM THE WALLS OF A BUILDING INTO AN AIR PURIFIER

VentiduePortoFluviale is made with Airlite eco-paints, a patented technology capable of eliminating atmospheric pollution (NOx), and the new Yourban2030 anti-smog mural, 45 m long and 6 high, will eliminate the smog of about 47 petrol cars € 6 per day.

Airlite paint uses the same physical principle used by nature and transforms the walls of a building into an air purifier. It does so without filters, without absorbing or covering odors and with lasting effectiveness. 100% natural, it generates electrons on the surface of the walls, which, when combined with water vapor and oxygen in the air, produce negative ions. These are the invisible allies of well-being, capable of neutralizing the pollutants in the air.

Sustainability is not only a message, but seen in concrete application--such as materials one chooses. 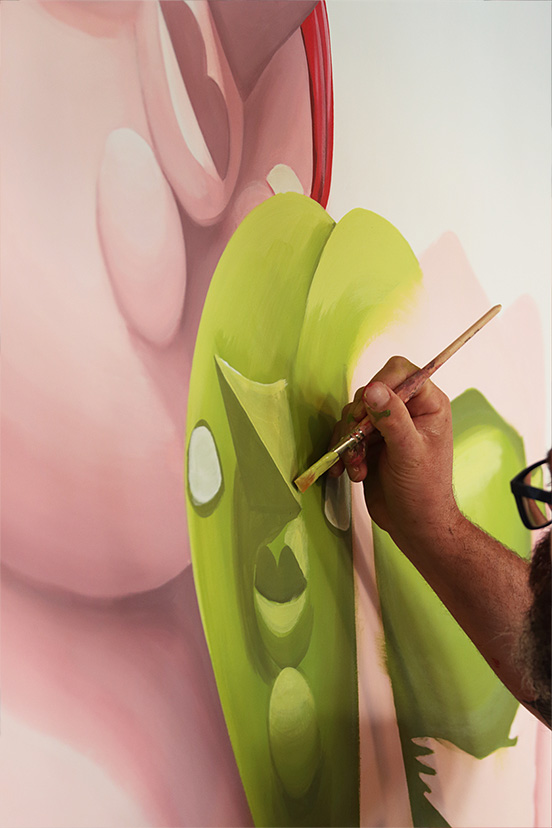 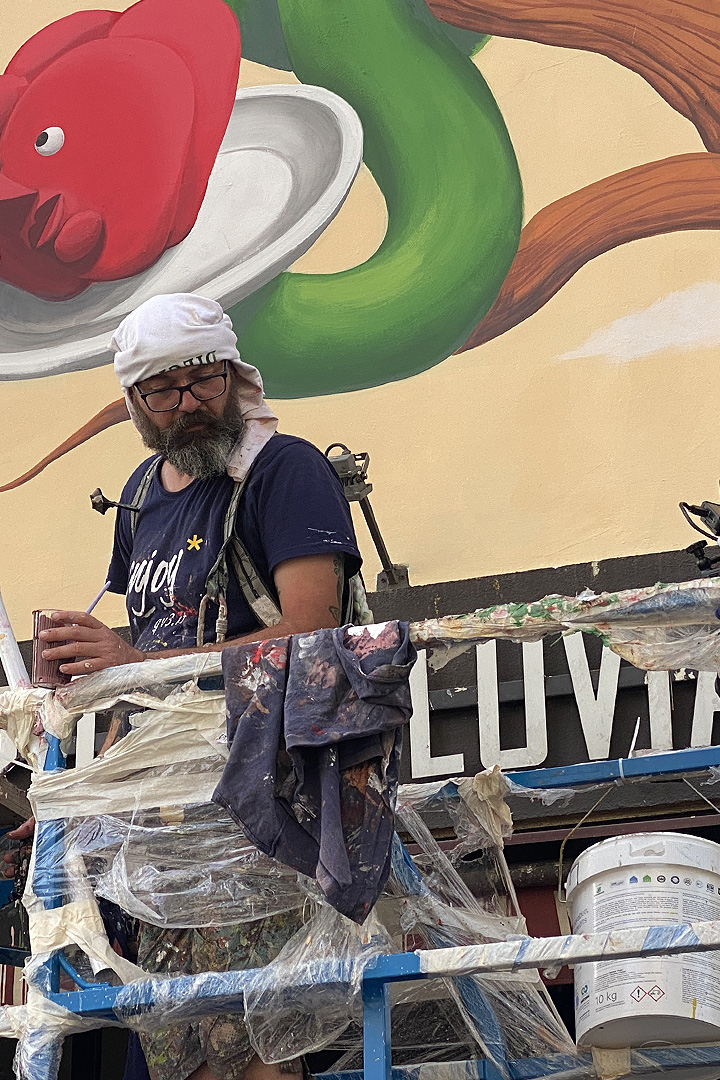 ZED1 is one of the most popular and well-known Italian street artists. Born in 1977 in Florence, he started painting walls during the first half of the 90s. His aesthetics are the result of a personal pictorial imagination capable of effectively intercepting and conveying themes and ideas related to society and the human being.

“The first painting that begins the story of Mela Mundi represents the first apple par excellence” explains Zed1, “that of Eve, original and pure. The second is the box representing social differences. In the third panel, the same tray with the emperor's leftovers is stormed by servants and slaves. With the fourth panel we arrive in the era of the Crusades, with a knight who sets fire in the name of God. The industrial revolution of the fifth panel is the beginning of the contamination of apples / nature, while the sixth tells the contemporary era: in a polluted world, nature is now transformed by man who shows off an unnatural cubic apple, far from its origins and from nature itself. Inside Porto Fluviale the surprise ending, which makes for a hope: Eve re-embraces nature, the process of humanity begins again, which entrusts change to the new generations ". 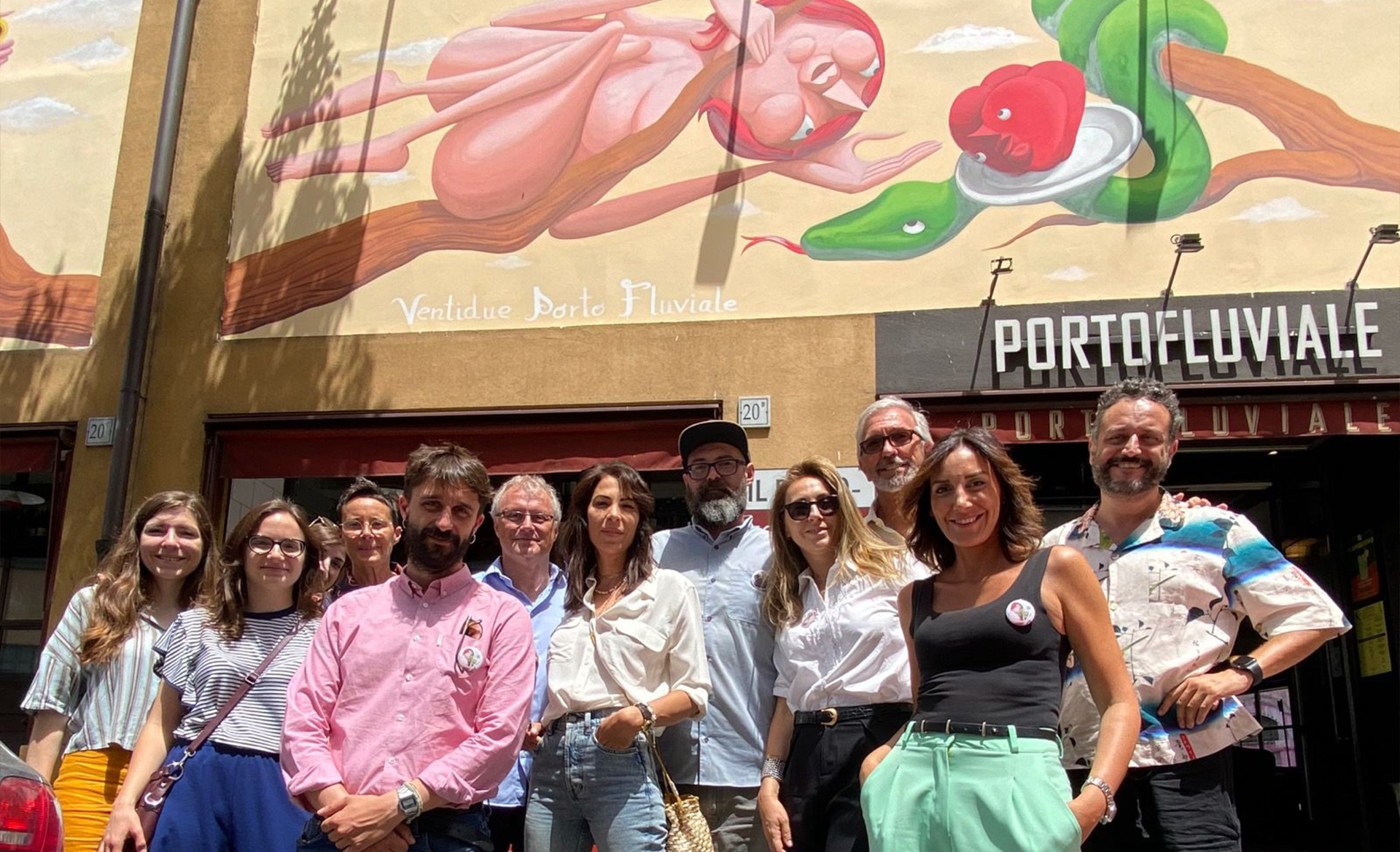 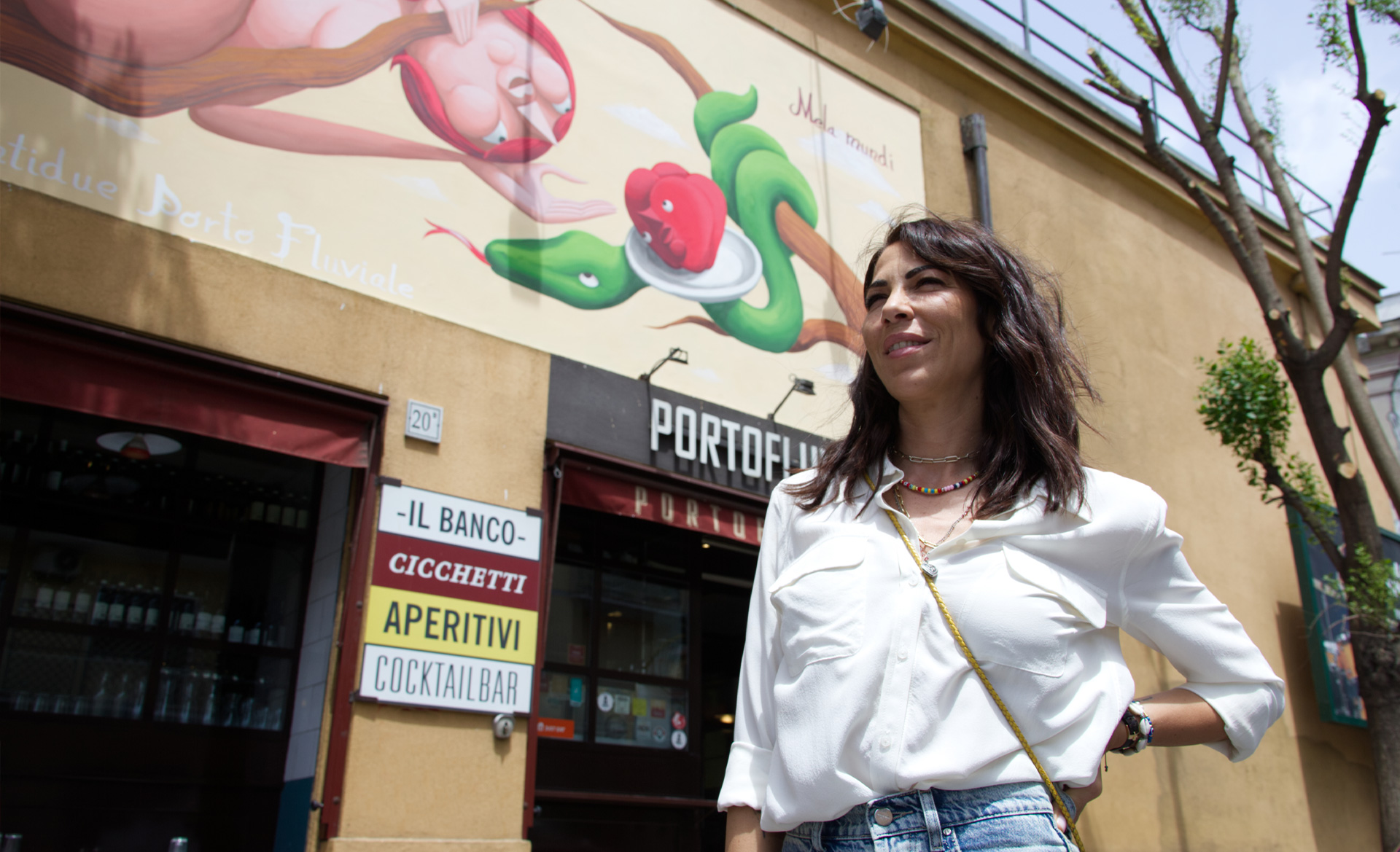 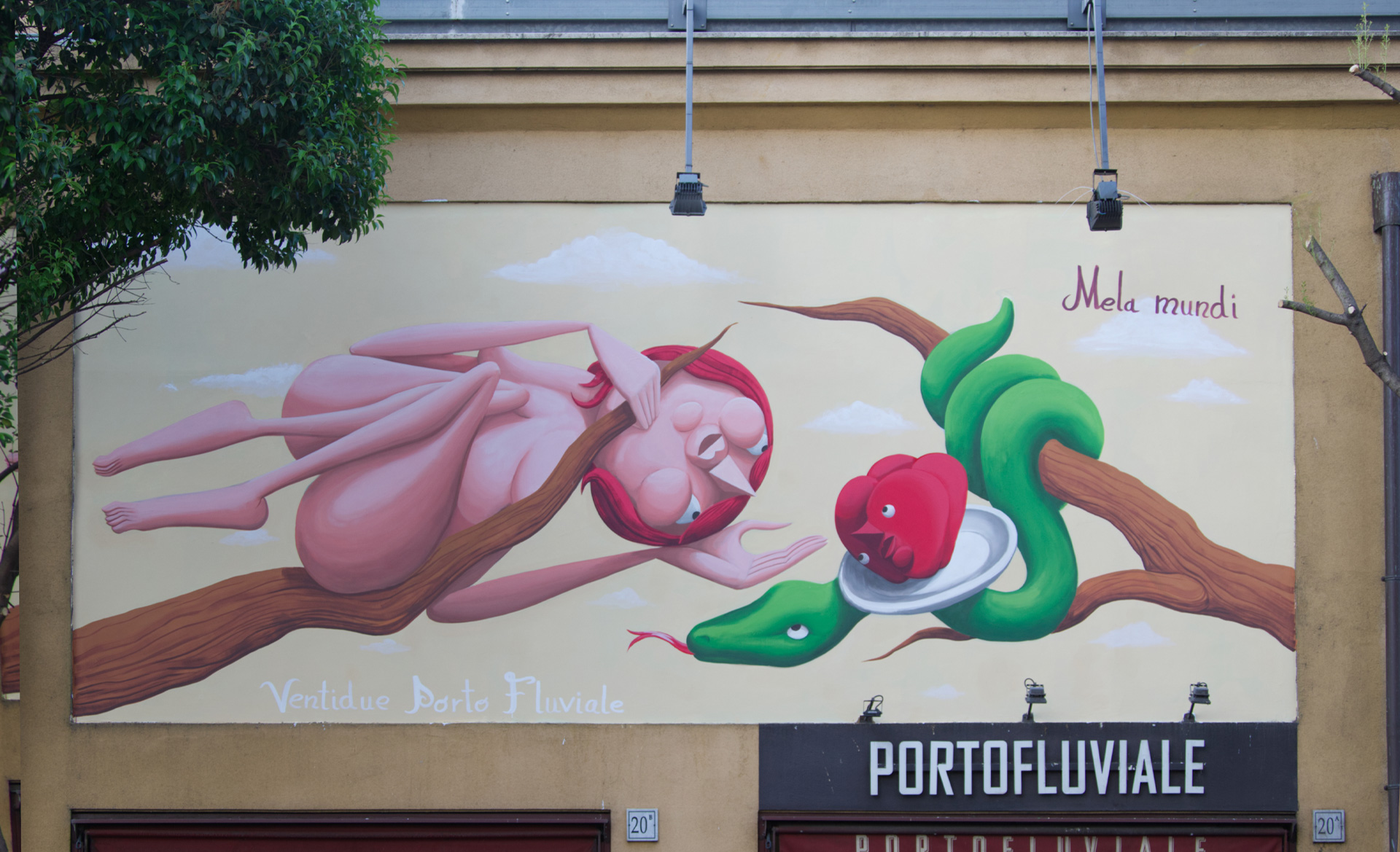 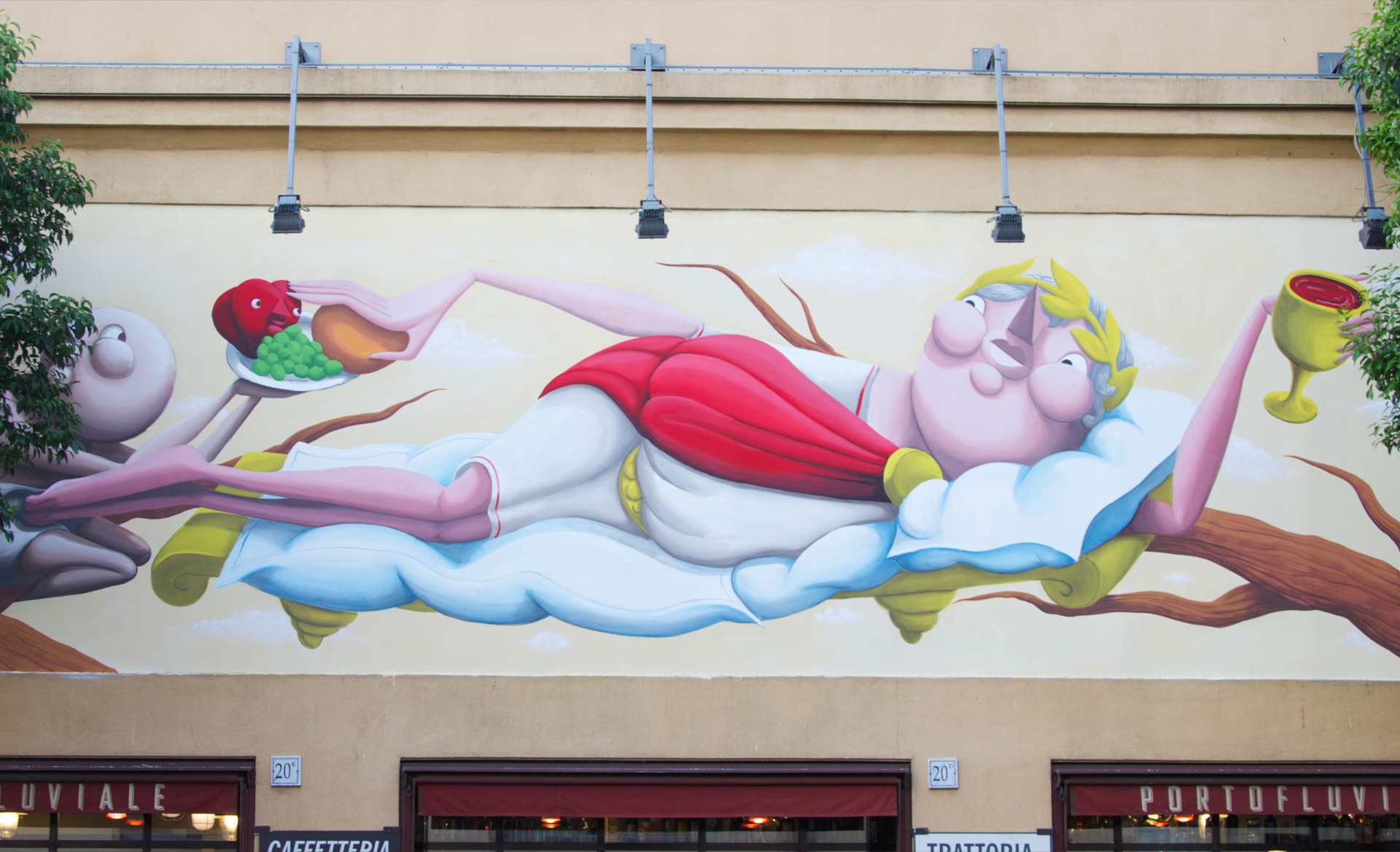 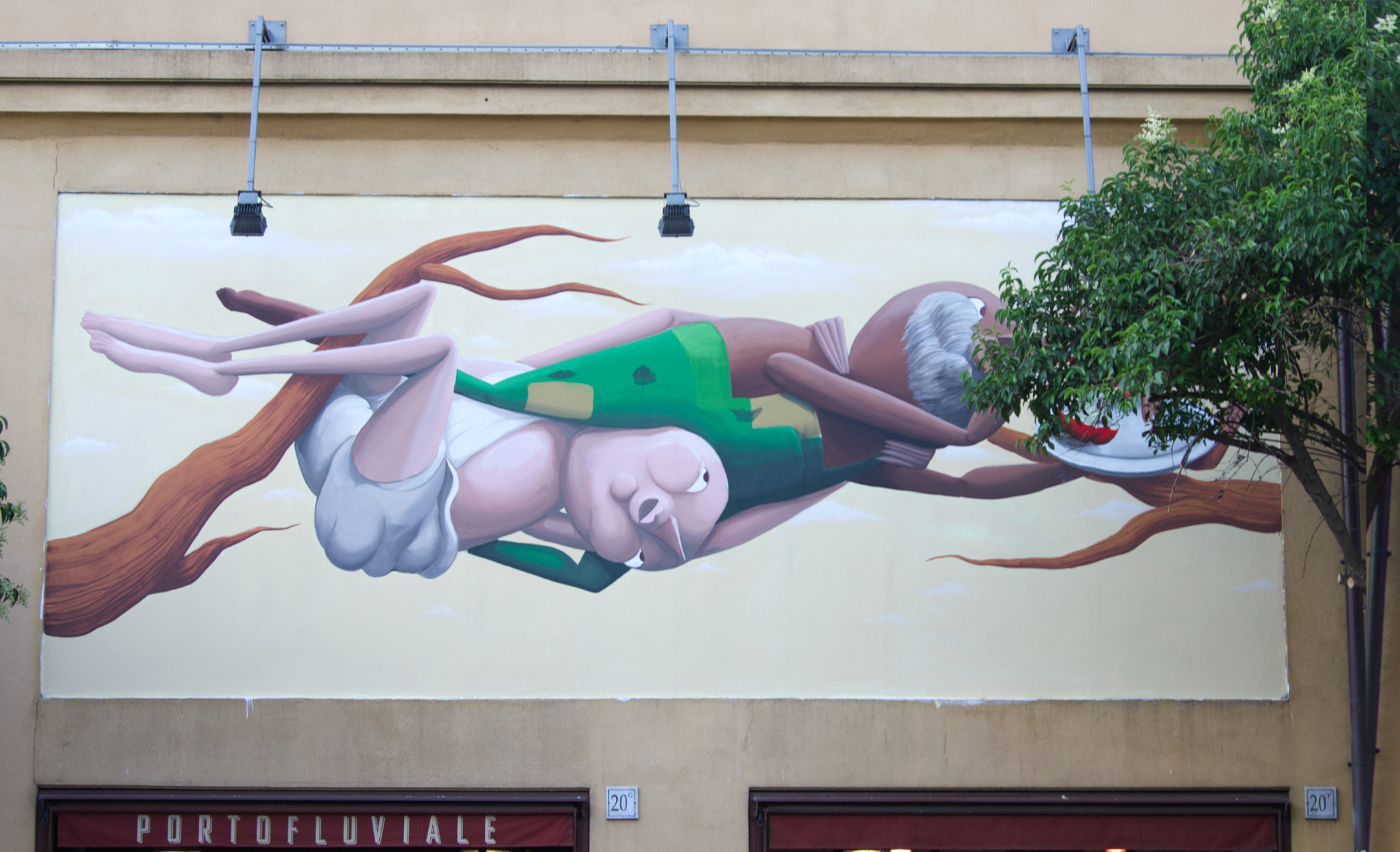 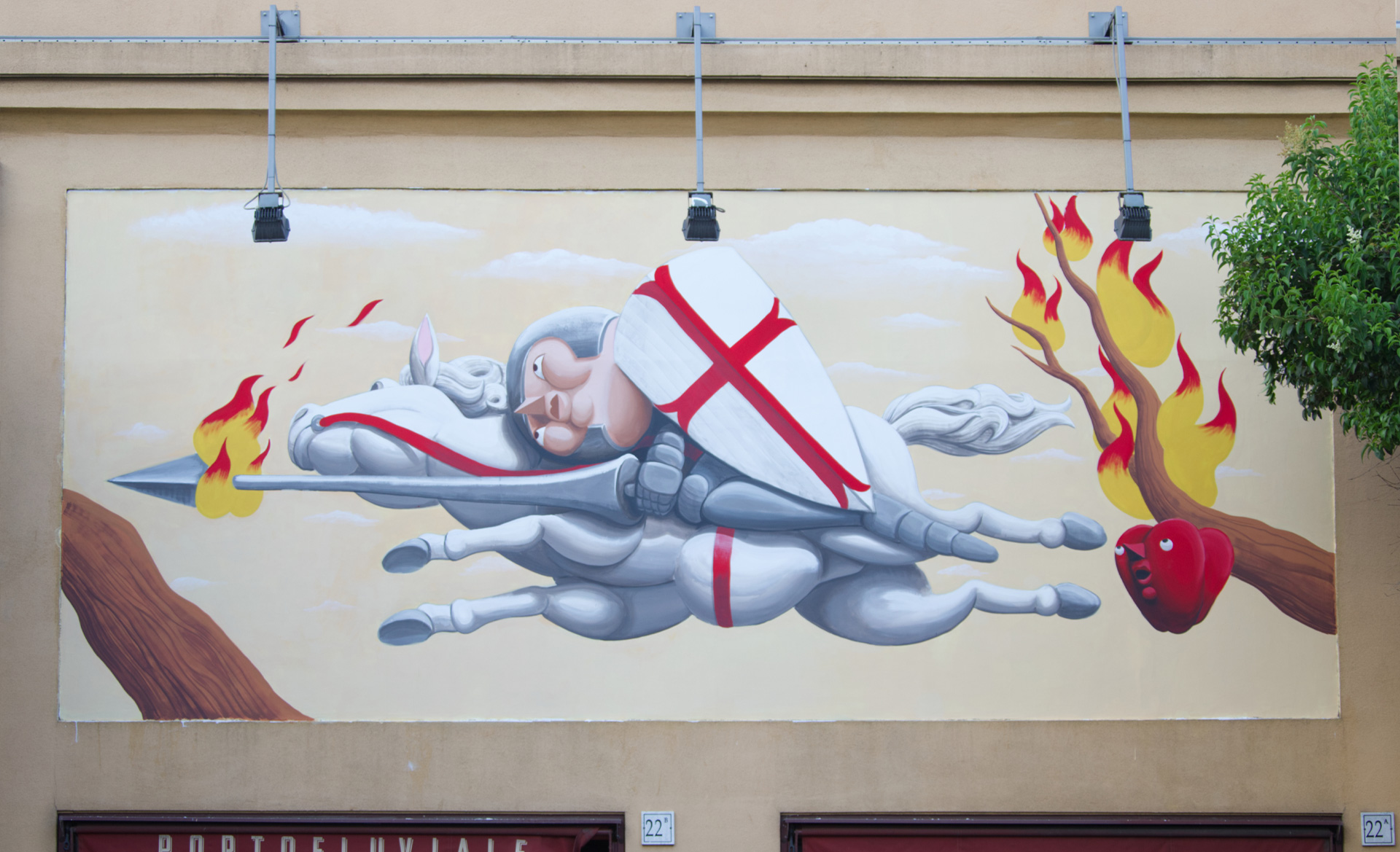 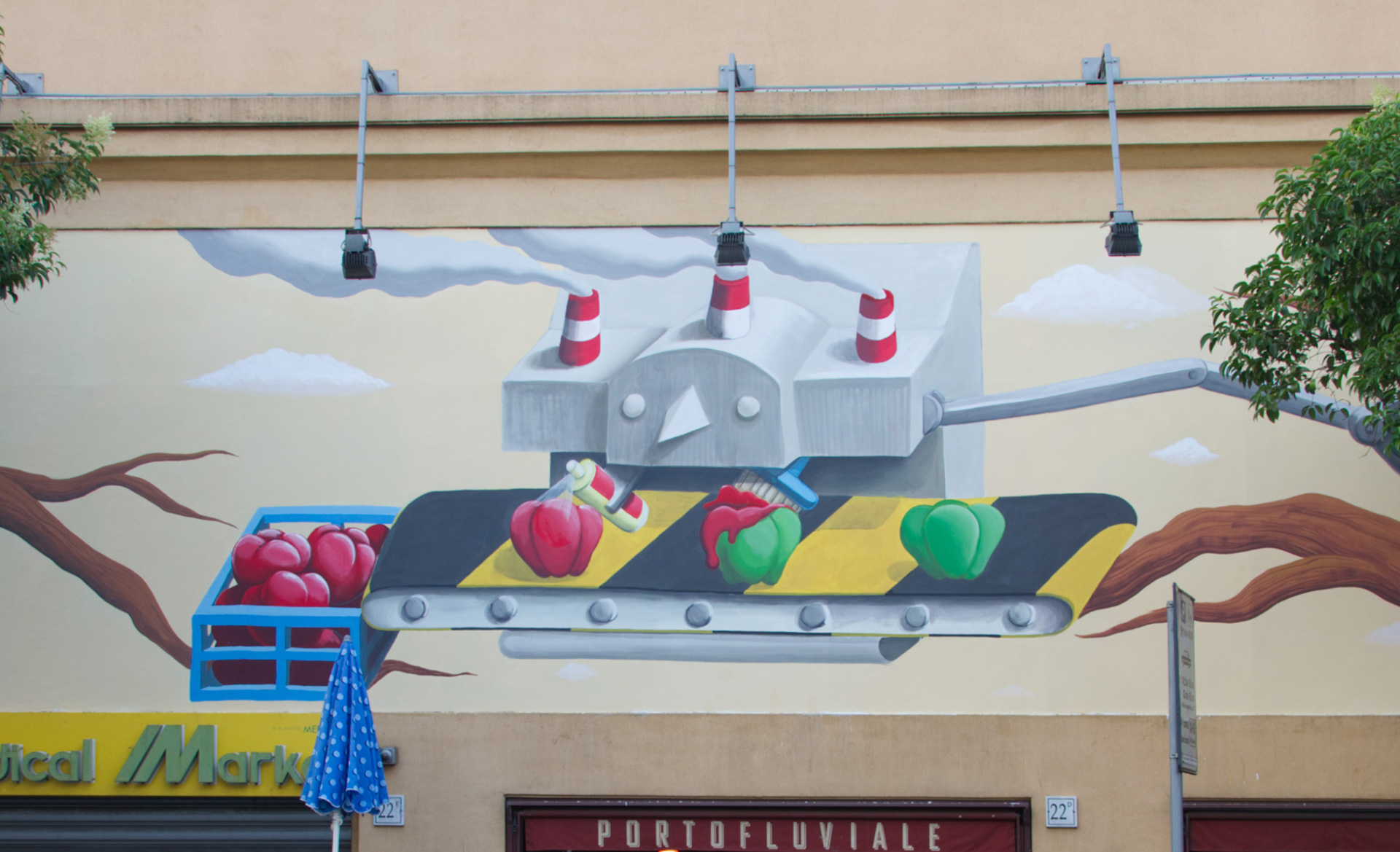 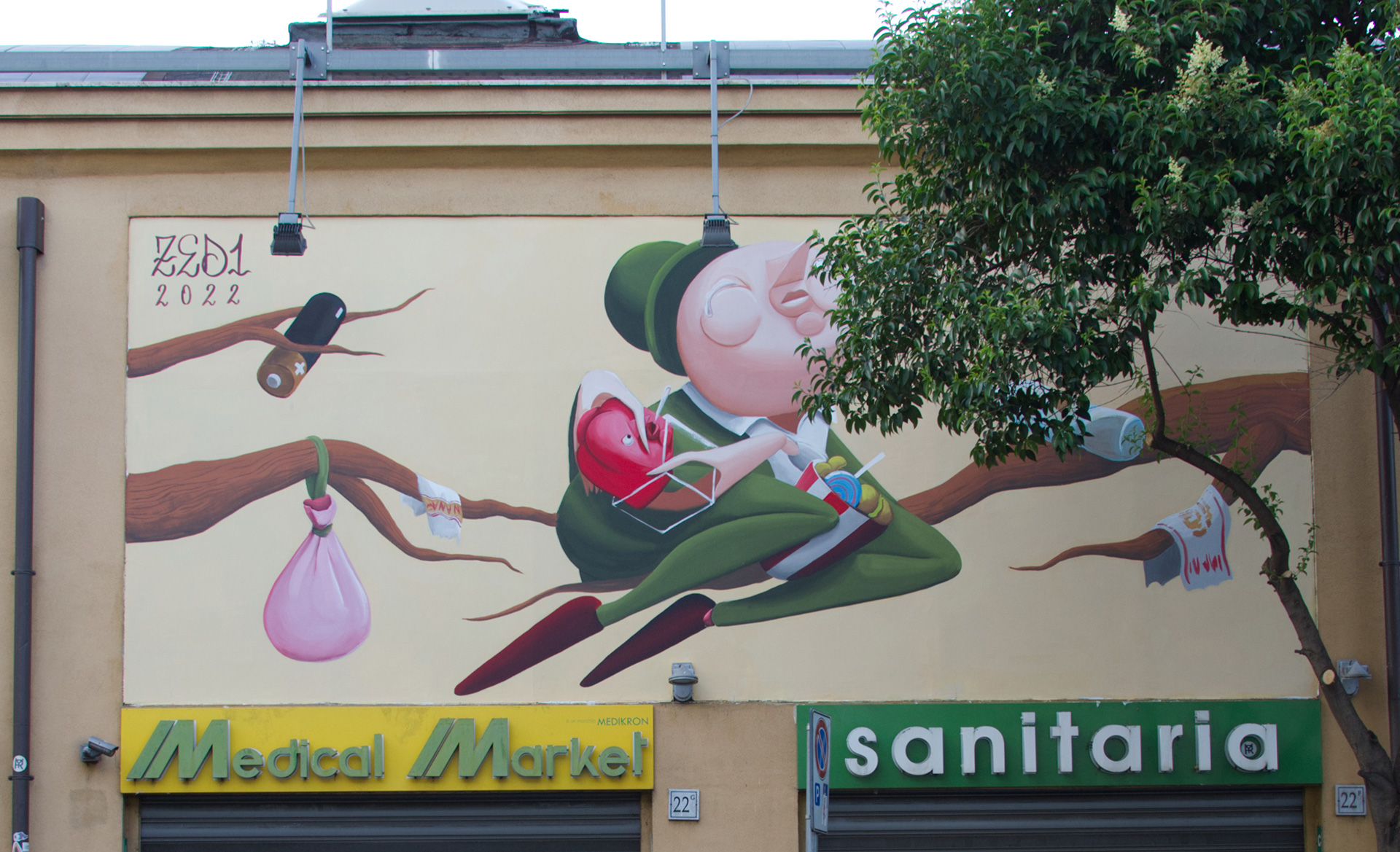 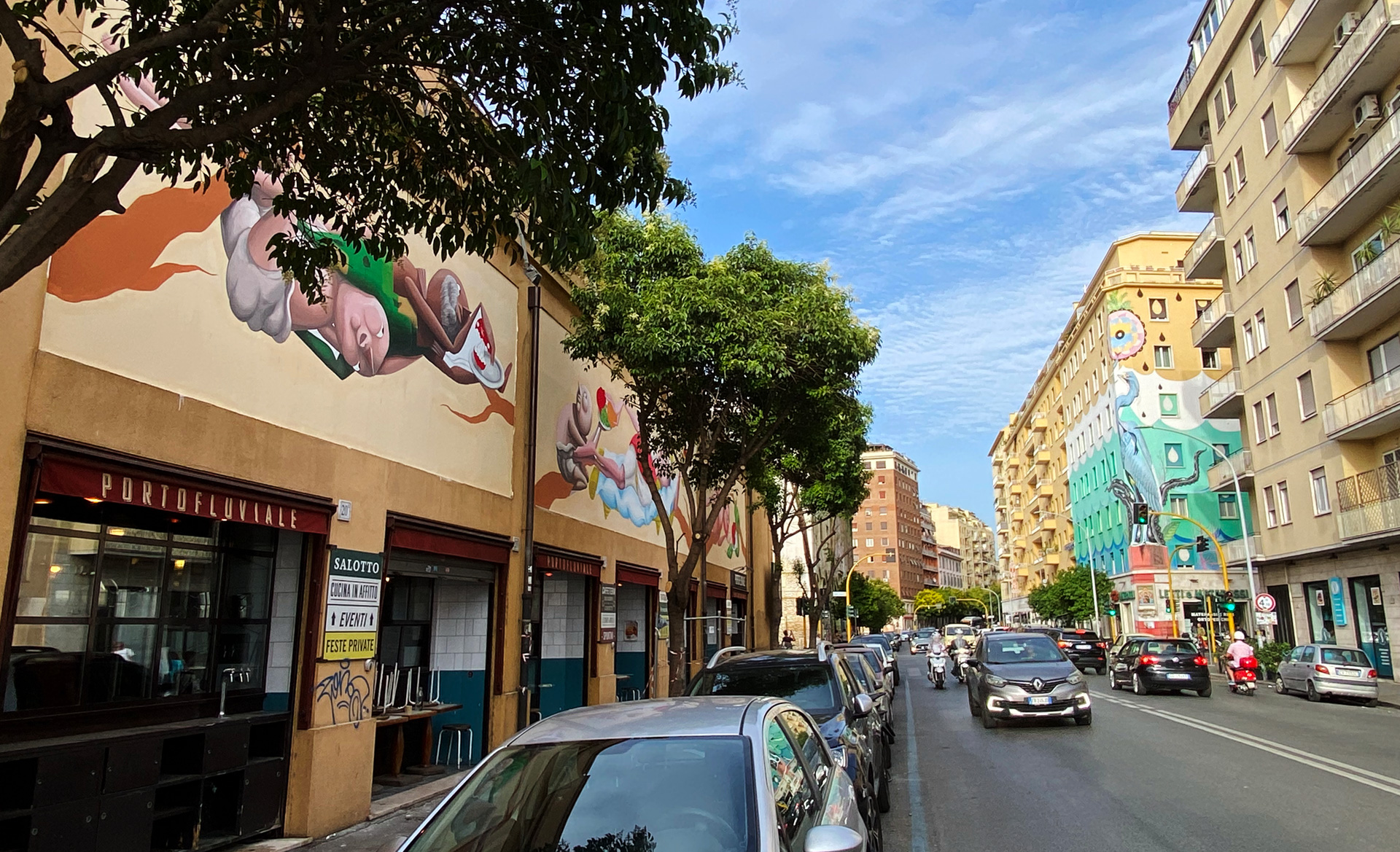 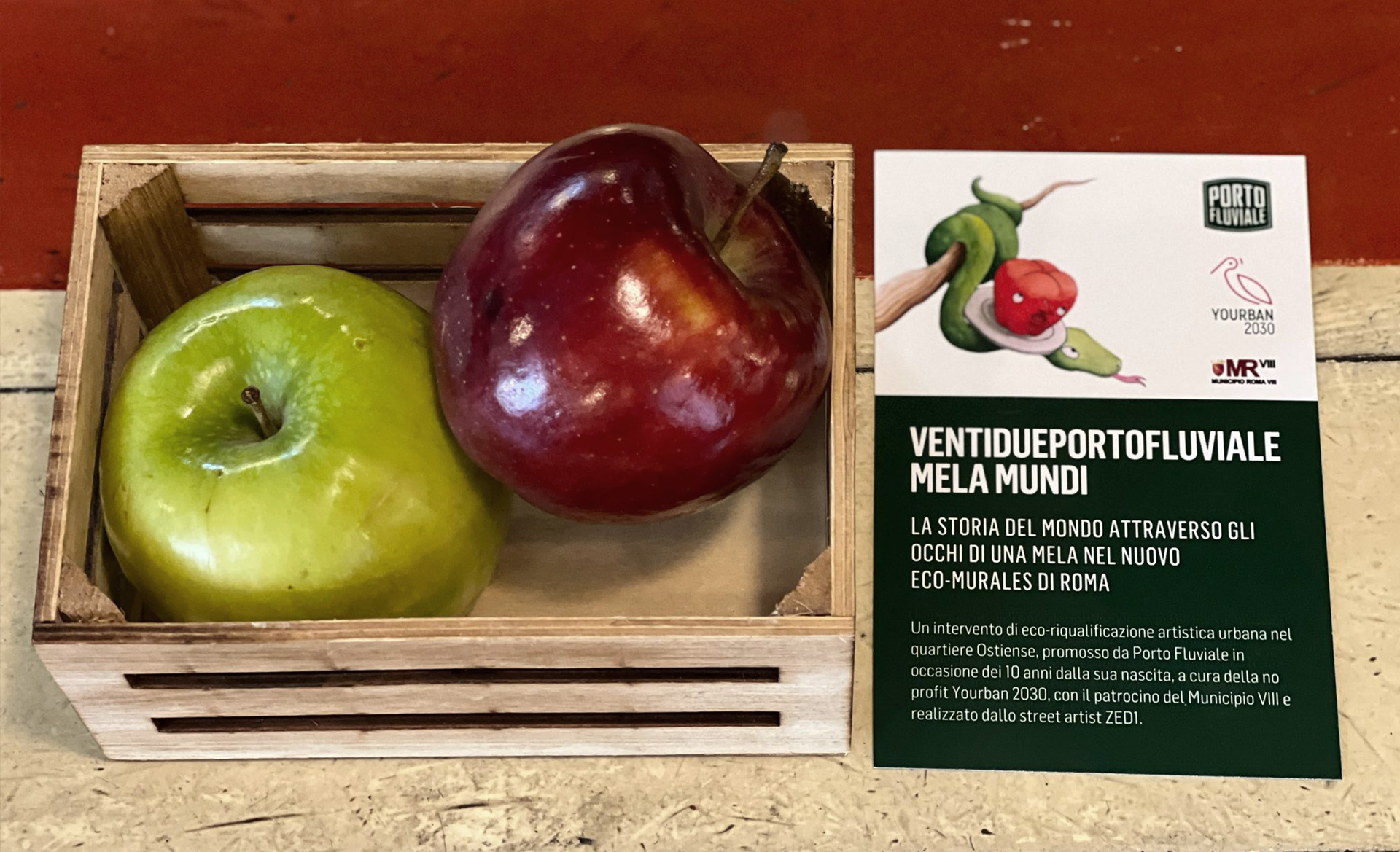